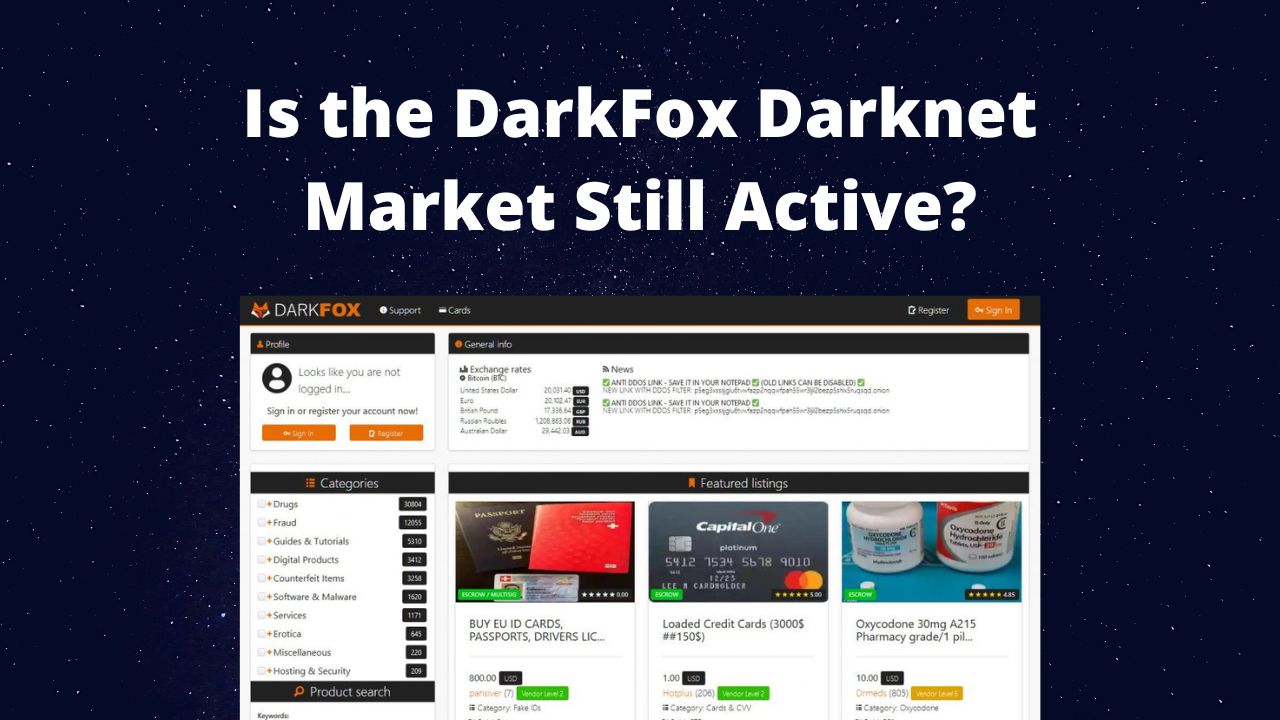 Since its inception in May 2020, the DarkFox darknet market has been one of the most popular destinations for illicit goods and services.

The market is home to about 7000+ listings, with the Drugs category accounting for about thirty percent of the total listings. DarkFox is easy-to-navigate and highly searchable, and its interface is coded from scratch.

However, recently the site was shut down in January 2022. But is the site up? To know this, keep reading!

No Registration Required ( Not Changed )

DarkFox allows you to access the entire market without signing up! You can view the products, pricing, reviews, and full vendor information.

But yes you can sign up too, just in case you want to save your information.

DarkFox didn’t experiment much with its UI since returning. Its interface is simple and in line with what mainstream darknet markets feel like. As is traditional, you’ll see the main screen divided into three main sections:

The top bar will help you navigate through your account settings, such as accessing your profile, wallet, and support centre.

The left sidebar will show your account information and product categories.

A more advanced search function is hosted on the left sidebar.

The rest of this page is dedicated to showcasing the offered products.

The market has over 25,000 listings, and despite being relatively new, the quantity of products exceeds that of other markets.

The product categories are kept simple, just like any other traditional market. You may find categories such as:

2021: A Year into The Market and Mixed Reviews

On the 5th of February, 2021, a user declared DarkFox as an exit scam. He said, “Deposited BTC, and it never showed up in my account. User Followed the transaction on the blockchain, and the BTC was rolled into a different account.”

On the 17th of June, a buyer said he didn’t receive the product he ordered, and when the user filed the dispute, the support didn’t respond. Eventually, the vendor responded by saying that “there’s no support on this website” and later added that on most occasions, “he just runs the ads and collects the money.”

Another bad review came into the light on the 14th of July. The user stated that he didn’t receive the refund amount after the vendor could not provide the required quantity the user wanted.

The user explains that he filed for support more than 2 times and didn’t get a response from the admins. The user, later on, posted his problem on the dread. The admins/mod of the forum responded that the refund had been credited into his account already.

On logging back again, the user found nothing and informed the dread mods again, but the situation didn’t change. The buyer claimed that the admins and mods have access to the account and PGPs despite the user enabling the 2FA.

A buyer on the 17th of July 2021 claims DarkFox to be the best darknet market with top support and trusted vendors.

A user on the 17th of July stated that all the positive reviews on the website are done by the people who are running the website. He further adds that the website will take your money and won’t deliver the products.

2022: Fall of DarkFox and Relaunching

In January 2022, DarkFox went down, and no one knew why. An admin name “Paris” from the dread forum posted a warning message “I do not know if it is incompetence, laziness, compromise, or if the incentives to let scammers run rampant is in the admin’s favor, but it’s enough for a limitation. Darkfox Market will now be limited. This means the subdread is under dread staff moderation (posts are manually approved) until such a time where faith in the admin’s competence is restored.

Let me outline the reasons behind this limitation.

Starting a couple of months ago, there were some reports of scammers running wild and trying to extort buyers. For a growing market, this is common when the bond fee is relatively low and listing publishing has no review. Generally, market admins get it sorted out when they clean out the scammers and organise the site more to protect the buyers and vendors.

That is not what happened here. What has happened is a nearly daily report of new buyers (some with proof, some without) using the dark fox market and not getting a successful transaction done. Disputes are not getting answered. If you look at /u/DarkFoxMarket’s admin profile, his posting activity has dived. That is not to say he is completely inactive. Most of his recent activity is cleaning up this subdread from all the posts like /post/c60c58af5a58bf41c3bf /post/736224160d3bcb60f4db or /post/fe58f9de968cdb998f05 and then not doing anything to address them.

Recently there was a report from a reputable vendor WHO NEVER EVEN VENDED ON THE MARKET having a profile with the correct PGP key, full FE privileges, and over 20 sales. How the f in the world does that happen? And why does it take multiple days to get sorted?

After a full scrape of the site, a few things appeared. Old vendors who are now overall inactive or compromised are still left up; there are minimal disputes compared to the negative feedback, tons of enabled listings from vendors who are inactive for months, sometimes over half a year, many MANY multiple, multiple listings of the same thing (at times only with a different image) (example see licarter NOW BANNED), lots of vendors but most have no history on other markets (know recon has a limited set of history though).

Over two weeks ago, I talked with Darkfox’s admin to see his perceptive. He said the market was getting targeted by a group of scammers, which is why all these things are happening. That automated spam creates waves of tickets and messages on the site. That automated vendor was purchasing and listing, creating thousands of listings at first, but then they transitioned to lower listing counts. So I gave it time. Growing pains that will be fixed by a change in the bond amount listing approval process and checking image hashes so removed listings couldn’t get re-uploaded. A day or two worth of development work, if that.

Almost a month passed, and yet I see no change. My disappointment is as high as I believe your distaste in me right now for making this post /u/DarkFoxMarket. But I do hope you understand why my hand was forced in this regard. When even a vendor starts to get pissed at you for letting scammers use his name, you must know that you fd up.

Let this be a growing fire under your a**. If people are automating their spam, work on a new captcha (the irony is not lost on me; I swear the dread update is coming soon). Spend a day and clean up the listings. Disable vendors listings who are gone and are not coming back. Get it back on track to restore confidence that you can even get it back on track. You can get the faith in you back if you do some actions and communicate what is happening. The silent treatment is only getting people more and more pissed at you.

Simply put, get your s**t together, man. Get it sorted, or you simply won’t be welcome here anymore.”

In February 2022, the market reopened, but the scams on the website continued.

In March of 2022, a user stated the names of vendors that scammed him. He added that due to the absence of DarkFox admin, It’s easy for any vendor to scam people. He also claimed that even the reputable vendors on the site had duped people.

Further, the user mentions that a vendor named “HappyShopOrigi,” who had a nice reputation on the website, scammed him for merely $84.

Later, he mentions another vendor named “Fastplugs.” This time the user wanted to order a $170 clone card, and the vendor asked the user to finalise the deal, but after hesitating, the vendor assured the user that he didn’t have to wait for hours. The vendor further added that he had shipped the product and provided the tracking details on the website. Upon following the tracking details, the user only gets to see “out for delivery” as a status message for days.

Later, after 5 days, the vendor contacts the user on a website called wickr. He mentions that the product has been stuck in his country and requires about $140 to sort out. The vendor ensures that he will return the amount as soon as he solves the problem.

When the user contacts the customs in his country with the product details, he gets to know there’s no such product resembling the details provided.

Another scam gets reported on the 6th of June by a buyer who got scammed for $160. The user wanted to buy a PayPal recharge sale, and a vendor named “hotplus” duped him for $160. The user also mentions that the support of the website has completely disappeared. The buyer further adds that the website has a lot of scammers, especially when you’re in the market to buy credit cards and PayPal transfers.

A user on the 8th of June posted about the scams on the rise in the market. He says that DarkFox is a slow exit scam and further adds that the moderators of the website don’t do anything intentionally. The user says there is no support on the website, and when all the purchases end in a dispute, the website goes down, and the founders collect all the money and scam people.

The user also claims that many of the positive reviews on the website are done by the vendor.