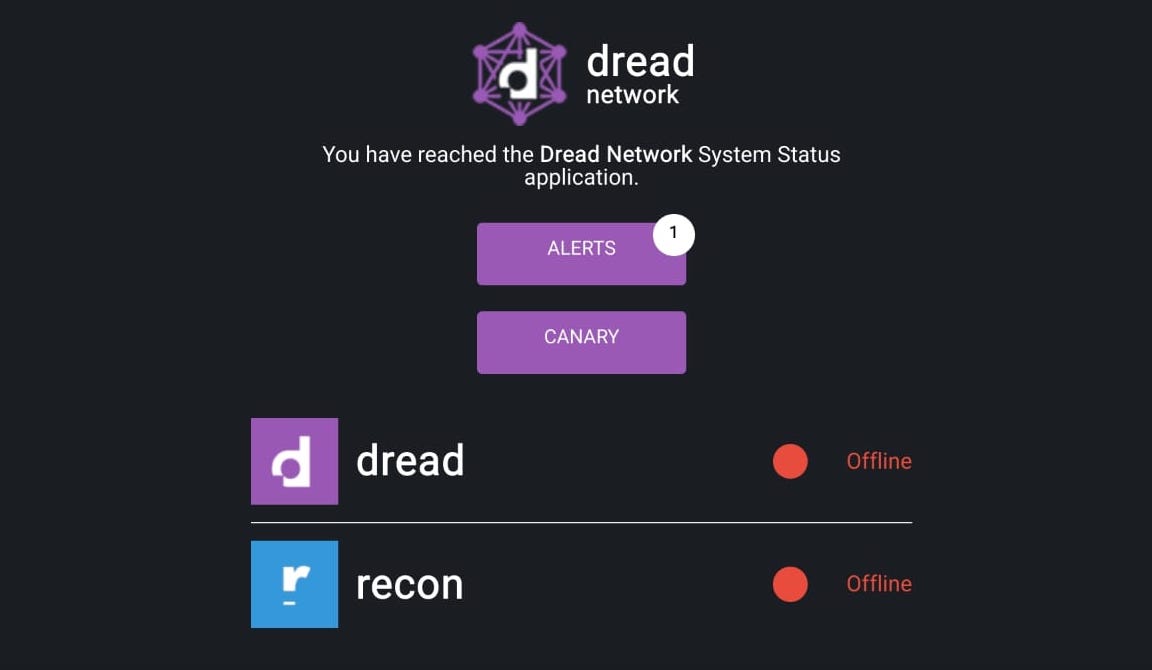 2022 is easily Dread’s most difficult year since its creation. From consistent scrutiny and DDos/DoS attacks. In the most recent news, the Dread servers were attacked and went completely offline, taking Recon and DNM Bible along with it. It’s been more than three weeks since the head admin, “hugbunt3r,” gave the community an update on the situation. For once, alternative Darknet Market forums gained popularity as it’s uncertain if Dread will ever come back online.

Why Is Dread Forum Offline?

The simple answer is that they’re unable to deal with a massive DDoS attack against their servers, so they’re just trying to upgrade and fix their servers. But their silence could mean there are bigger issues at play.

Although the entire website has been offline for three weeks, their problems started around May (around the time that Archetyp left the platform.) According to hugbunt3r, it’s probably the same attacker that forced Dream Market to close back in 2019, and they’re making attempts to extort funds from Dread. He even claims that other Darknet Markets were attacked and opted to pay those attackers with an undisclosed amount of cryptocurrency.

Since the attack on Dread started, the entire Tor Network has slowed down by nearly 50%, according to statistics released by the Tor Project. And it looks like the attacker hit the nail on the head.

On November 30th, the Dread admin made a post on the subreddit r/DreadAlert explaining why the servers would be going down.

I’ll try to keep this brief. As many of you are aware,

we’ve been hit with the largest scale DoS attack yet

which has been able to mostly hold Dread offline over

the past couple of months. Everything has been stable

on our alternative private onion links as well as the

I2P gateway and we actually restored full service for

the past few days on the main onion link.

Unfortunately we are now completely down on all access

points, which also affects Recon and the DNM Bible. I’d

like to apologize for the inconvenience, however we have

had to take urgent action in moving to the new server

cluster we have been working on. Paris is completing the

restructure, which will increase our ability to expand

resources towards countering DoS attacks and there are

far too difficult to change around if we were online

right now. We had intended for this to be a smooth

migration but sped up the process.

Within the next day or so, we’ll place temporary

holding pages live on our onions and I2P gateway

explaining this and additionally publishing brief

updates or any emergency alerts there in the meantime.

Personally, I will be working on on-going projects to

get them to completion during this time, as well as

following through with the launch of a new platform

concept which should mitigate the effects of DoS

attacks in the future, hopefully rendering them

fairly useless. This will also involve restoring some

of Dread’s API systems which I rewrote over the past

week, but any functionality for Dread will be

unavailable at this time. Please bare with us and

attacks will become a thing of the past, not just

for us, but for any affected service.

Stay safe everyone and once again I apologize, we’ve

been working non-stop on solving everything.

Shortly after, the servers went offline and an alert displayed with a message claiming

“[December 1st, 2022] All services are currently offline while we complete migration to an upgraded server infrastructure. No ERA at this time.”

He further answered some questions that the community had over the I2P bridge (which isn’t working at this time either) u/Paris, the other head admin of Dread, is (allegedly) working hard to change the system, remove “legacy” resources, and speed up the server upgrades.

In the comments, u/hugbunt3r lobbied for the Tor Network to move to a Proof of Work (PoW) model to prevent DoS attacks, remove bots and spam, and inevitably “fix multiple issues with the Tor Network.”

Whether it’s due to the fact that the two admins are hard at work and simply can’t be bothered to explain themselves; Or if they’re contemplating throwing their hands up and leaving. A large portion of Darknet and Dread users noticed it’s down and miss the Dread forum presence.

The Hugbunt3rs post has over 150 comments and multiple posts on subreddit r/onions (like this one) showing that they’re “lost without Dread.”

Without Dread, many darknet users are running around like “headless chickens.” The market plays a vital role in the safety of Darknet markets. From users looking to find out about the legitimacy of vendors, a place to reach different DM admins/staff, and the number one website for darknet discussions.

Usually, when Dread sees an issue and its servers go down for a few days, the darknet community will speak on subreddits like r/darknetmarkets, r/DreadAlert, r/Onion, and r/Darknet. But this time things are different. Instead, users have flocked to CryptBB, Alphabay Forum, Archetyp Forum, and even Majestic Garden. The entire Darknet market is feeling something is off about Dread.

The greatest worry is that Dread’s DoS attacks were by law enforcement and that now the Dread forum will be compromised should it ever return. This claim has been heavily disputed by hugbunt3r.

As I’ve said many times it isn’t LE and its fairly easy to pull off in the grand scheme of things because of how the Tor network functions. Essentially it is bad and not something that could actually be fixed without completely reworking the whole structure of the network. PoW should ensure that an attack cannot do enough damage to take a service online, not one with adequate configurations at least.

PoW (Proof-of-work), doesn’t solve the inherent flaws of the network but forces a requirement for every connection to solve equations computationally, which would still be automated but slow down the attack to make it powerless.

The last message hugbunt3r sent so far was a reply on the subreddit, which was on December 8th, but both Paris and HugBunter are leaving small updates on Dreads .Onion link under the “Canary” button. Each message has its PGP signature to keep the users at bay regarding theories.

On December 16th HugBunter left a message saying that “[He is] alive and free… and in control of the Dread Network and related services.”

And on December 13th, Paris left a message saying that “[He is] alive and free” and that “This downtime is my fault, We should be up within a week”

Once again, they haven’t managed to stick to their deadlines, leaving us all wondering what the hell is actually going on.