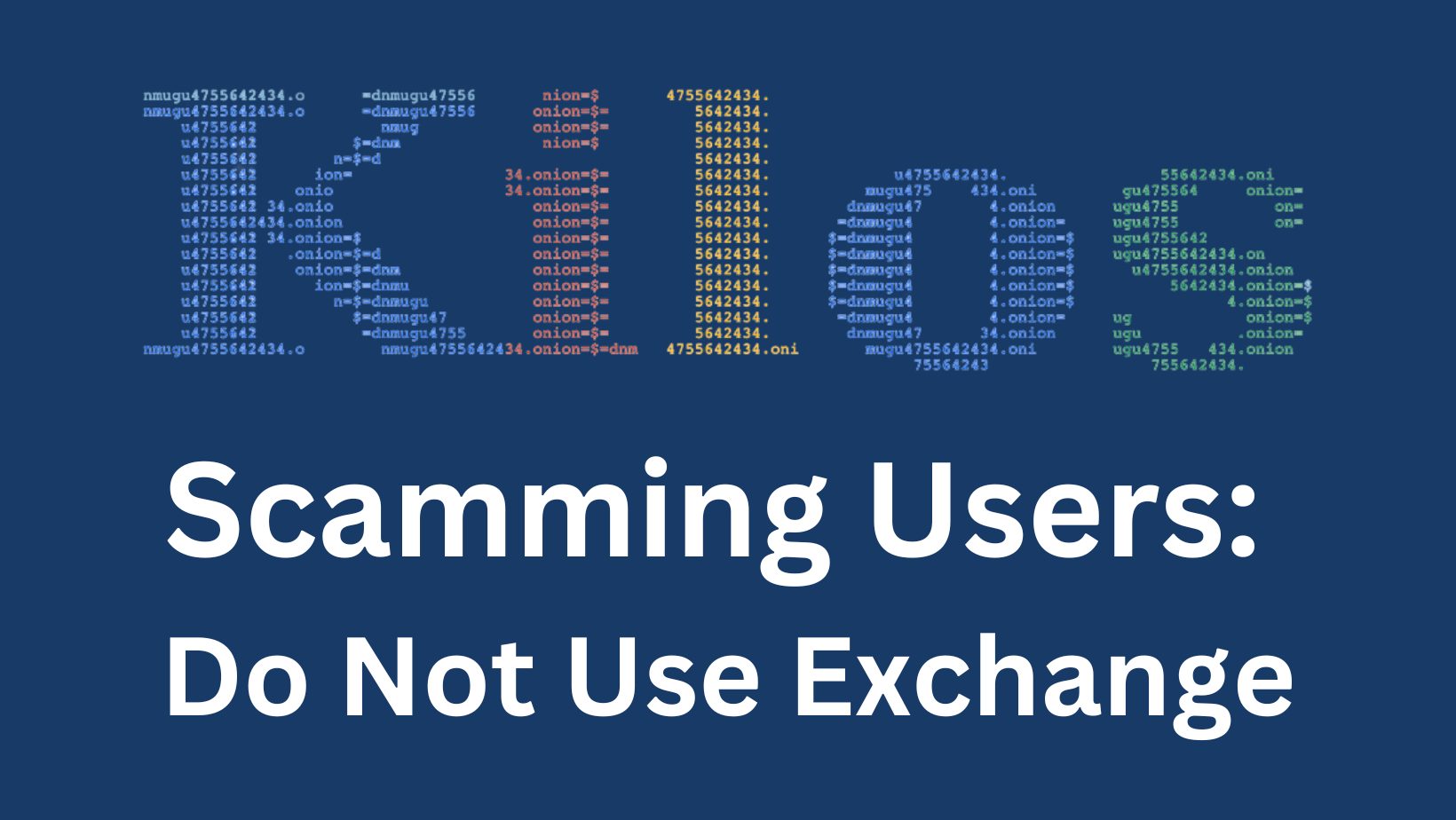 Kilos exchange is a KYC-free crypto exchange that plays a vital role in the darknet market scene. Kilos includes options to convert XMR into Bitcoin and the built-in “Krumble” BTC mixing service. However, it seems that the Kilos exchange team turned off all automated processes and is holding all funds. It’s been weeks since, and the worst-case scenario seems imminent. Kilos.Exchange is exit scamming.

What is Kilos Exchange?

The Kilos Crypto Exchange is a part of the Kilos darknet search engine. The exchange was launched about four years ago and included a few unique features. Such as Kilos Krumble, their Bitcoin Mixing service which helps users clean their Bitcoin. The mixing service included randomized transaction and commission fees, randomized transaction delay, and multiple address payouts.

In more recent years, they also included the popular “KAAML” feature, where a user could pay a flat $25 fee to receive “clean” BTC or LTC. Many exchanges include AML/KYC alerts now, and the KAAML would pass these alerts easily.

Each Kilos Exchange feature played an important part for many darknet vendors and customers as they used darknet markets. The website was seen as extremely trustworthy, and it’s privacy measures were efficient. But in recent news, they’re not doing so well.

At the moment, it looks like the Kilos crypto exchange is in the process of an exit scam. The website is still open, and users can still make deposits, but all withdrawals have been halted. The first signs of Kilos exit scamming came two weeks ago. But with Dread being down, there’s barely any coverage on the matter, making it easy for more victims to fall for their scam.

Over December, the Kilos Exchange promoted its “0% Fees January” campaign. This seemed like your typical ad to increase the userbase, but it almost always felt too good to be true. Even regulated crypto exchanges can’t afford such a promotion. This was their first sign that something crazy was happening behind the scenes, and it’s fairly clear now that this was to grab users’ attention just before their scam.

On January 10th, u/jelltris created a Reddit post on r/Onions claiming that he was “Scammed by Kilos exchange for $700.” It’s more than fair that nobody trusted u/jelltris as the darknet is filled with phishing links and scammers. But the user claimed that he’d been using the exchange for almost 3 years, but he could not withdraw this time.

“Obviously, my first thought was I’d been phished, so I double-checked the URL – no issues there. It was the same one I’ve always used. I’ve emailed kilos admin but had no reply.” – u/jelltris

But over the next few days, multiple users reported in the comments that they’d experienced the same and that they’d received their links from Tor.Taxi. After a week, another post made by u/smokingumbrellas on r/onions claimed the following

There was a couple of posts 10 days ago but making another one today for more visibility. I just tried to exchange $40~ of BTC into monero. My electrum wallet says the transaction has enough confirmations, website says “swap finished”, balance in my featherwallet is still 0. Fuck Kilos.”

So what happens if you use Kilos now? Well, some users say they simply don’t receive any funds, and others claim that they’ll send their tokens to the website, and even after a few dozen (even hundreds) of confirmations, Kilos marks the transaction as “Invalid.” About 120 Reddit users have spoken up about their frustrations with Kilos in the last two weeks.

Dark.Fail has reported on the issue and recommends users not use the exchange.

WARNING: Kilos Exchange is not completing crypto swaps according to many reports, could be scamming. It is a no-KYC exchange hosted on Tor. Check http://kycnot.me to research the no-KYC scene.

Currently, we can track atleast 3 BTC sent to Kilos Exchange since the 10th and an undisclosed amount of XMR.

Dread played a massive role in the darknet community. But it’s been two months since they shut their servers off and started working on massive upgrades to the website. u/hugbunt3r and u/Paris claim they’re working relentlessly to get Dread up and running again. However, they’ve failed every deadline they’ve set. With Dread’s absence, the darknet community feels it.

Although there are multiple darknet-based forums, and even new ones that popped up since… Dread felt like the home page of the darknet and a reliable place where you could trust discussions taking place.

Almost $70,000 in Bitcoin (and likely the same in XMR,) was sent to Kilos by darknet users who simply did not know better. With Dread’s presence, any dodgy business as such was picked up quickly, and its job to protect the users was essential. As one Reddit user put it

“I had a feeling with dread being down that more of this shit would start happening. I pretty much solely relied on dread to stay in the loop and now I feel like it’s so much harder to find up to date info about what’s going on.”

We’ll provide an update on Dread soon, but almost all darknet users await their return.

There is a possibility that the Kilos is going through some backend bugs which stopped withdrawals. But the admins have yet to report a word over the issues, and their marketing campaign makes the situation feel certain.

While this is unfortunate, it’s the risk of non-regulated exchanges. One most darknet users are willing to take. In the meantime, you can take a look at kycnot.me to find some “trusted” anonymous exchanges to use instead.