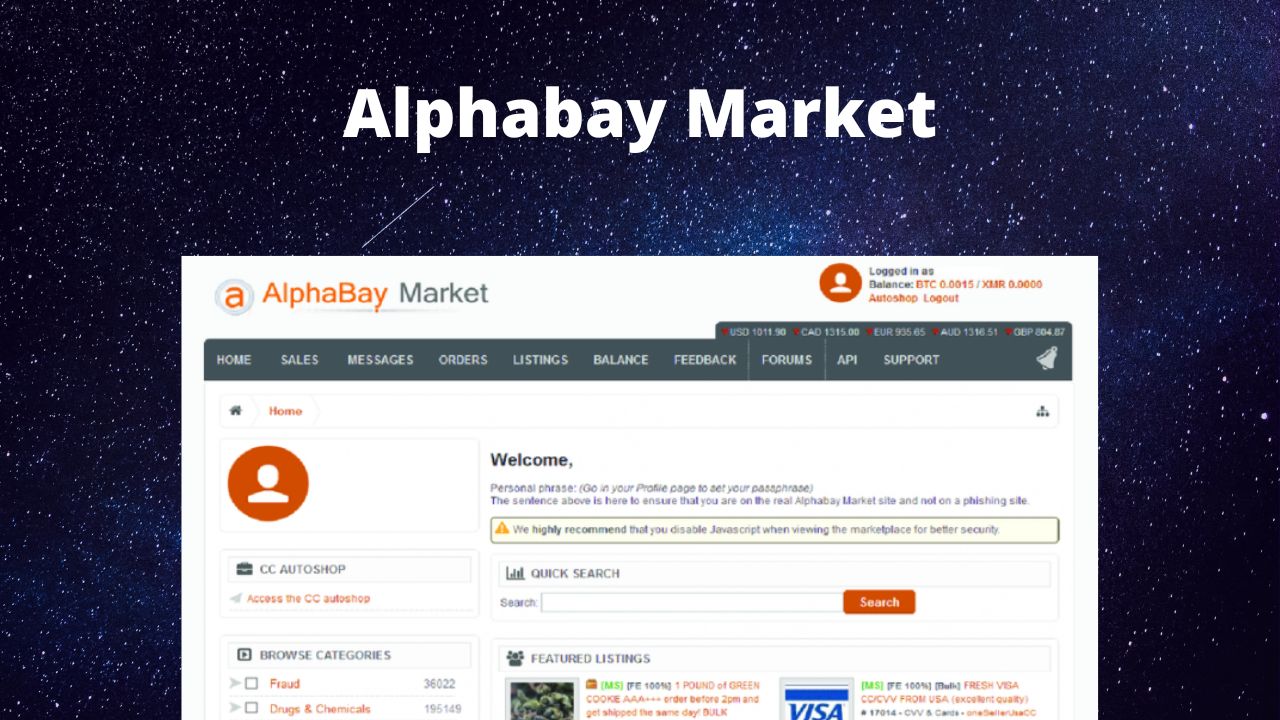 Anybody who knew the original AlphaBay Market will agree that it was arguably one of a kind. So it’s not surprising that many darknet fans have been wishing for the particular marketplace to get revamped again. But most of their dreams have come true since there is a new AlphaBay which they can use now.

AlphaBay Market is a dark online market that started in 2014. Just like any other darknet platform, it isn’t clear who runs the site, but it has been around since 2014. Cazes (alpha02), the site’s founder and administrator, took his own life during his extradiction to the United States. At the time, the community praised AlphaBay for its sound management. Cazes’ arrest came as a result of a very stupid. A deadly single mistake with OpSec cost him his life right before the market went crazy.

Four years after the market went down, the Market’s former customers and vendors got a reason to smile. One of AlphaBay’s administrators, DeSnake, released a PGP-signed statement on the Dread darknet forum. DeSnake , one of original AlphaBay’s administrators could not help, but bring back to life the former dark web giant. The message contained information about the intended relaunching of AlphaBay marketplace. It would keep the market’s original style and layout, but it would also be much better. At the moment, things are a bit different on the market. AlphaBay only accepts Monero, has strict product restrictions, and doesn’t allow people from certain countries to use it.

Our attention can’t help but be drawn to how quiet AlphaBay has been in the period since its “re-opening.” There have been a lot of problems with connectivity and downtime in the market. These could probably happen because of competitors or other things.

The AlphaBay management however says they want new customers to have a great experience at the darknet market. The “Roadmap” page talks about a darknet market that isn’t controlled by anyone. In this case, it’s hard to tell how much of this is real. Nonetheless, AlphaBay looks like it’s running well.

As soon as you go away for two minutes, your session will end. It means one has to to start the process over again by answering another captcha again. At the very least, it looks like they’re doing everything they can to keep things running in the face of huge odds.

The official AlphaBay market URL has remained unchanged. As is the norm with darknet markets, one has to encounter a captcha before reaching the login page. And once in a while, users may experience delays during periods of high usage. Solving captcha is a daunting task to many, especially newbies on the dark space.

So in such a case , Restart the Tor browser and navigate back to the AlphaBay URL. The system automatically sends you to the main Login page after completing the captcha. Under the term “Login,” there is a notice that reads, “Not registered? “Join us.” To register, click the message’s second half. Look at this;

Your username is your login credential, which you input along with your password. Maintaining a unique online and offline presence is encouraged. Choose a unique password and avoid reusing market credentials.

After inputting your password twice, select a 6-digit PIN for purchases. Select “User” as your account type, enter the captcha, and then click “Register” to complete the registration process. If all goes well, you directly go to the login screen, where you may enter your new username and password.

Following your login, you will get an email with your wallet’s recovery key and phrase. These are necessary in the event that you ever lose access to your account or wallet.

After saving this information, scroll down and read the AlphaBay terms and conditions, which conveniently show on the first welcome page. There is a great deal to read, and your session may expire before you complete everything. Then, once you’ve read it, click the “I agree with and understand the rules” option. “I have saved the information above.” Following the instructions, clicking this button takes you to the market’s main page, where a new welcome message will appears.

You may now browse the market, but first you must produce an account-specific PGP key.

The market structure is quite similar to AlphaBay, with a few small differences. The absence of well-known merchants and highlighted items in categories is one obvious distinction. The market does this to ensure that all dealers begin on an equal footing. Choose a category first, then a subcategory. There’s also a search bar for easy navigation. Look at this;

There are just a few alternatives available on the market (under 400 at the time of writing this article).

When you’re ready to make purchase, you may choose your shipping method and the quantity of things you desire. Keep an eye on the XMR conversion rate. If you agree, press the “Buy Now” button. Before submitting your first order, you should examine the AlphaBay rules. Maybe you’re wondering where you can get the outlined rules. Well, just check in further detail under the terms and conditions.

The vendor’s PGP key does not meet AlphaBay’s PGP key requirements. In your PGP application, use this key to encrypt the delivery data for your order. Make sure you have enough XMR in your account to cover the whole cost of the order.

The vendor’s return policy comes next. Then closely followed by a text box where you may input your secure shipping information.

I think this is irrelevant because the “Encrypt messages/notes with Seller’s PGP Key” box is already ticked. It would be pointless to re-encode the material. Send only encrypted shipping details (its probably fine for general questions). When you’re finished, click “Confirm Purchase.” The store will prepare and deliver your order, and the money will then be debited from your account.

Customers who purchase from New AlphaBay Market should Note following:

In comparison to other marketplaces, AlphaBay claims to be faster and more secure for all parties involved. But considering the market’s foundation, laid on the lessons learned from running a successful market place, probably true.

The AlphaBay escrow service safeguards your funds until the transaction is concluded and the seller is paid. It’s regarded as an excellent buyer etiquette to seal a sale. Once you’ve eceived an item and verified that it fulfills your expectations, then the next step.

Before the transaction is automatically consummated, the buyer has seven days to declare that it has been received. Unless you’re using a FE enabled vendor but if not, the payment should complete after the seller marks it as shipped (no vendors currently provide this option). And the market recommends never completing an order before receiving it.

In the event of a misunderstanding, buyers and sellers reach an agreement using AlphaBay’s Automatic Dispute Resolution (ADR) technology. It doesn’t even require the presence of a moderator. According to the market, the new strategy “essentially consists of extending the duration of escrow, entire return, portion refund, or replacement choices.”

The vendor has three business days to respond. If the vendor does not respond, the customer gets compensation. Of course, ignoring the matter is the best option. Our advise is to only do business with reputable merchants that have a track record of success. This is affecting all AlphaBay merchants at the moment (make of this advice what you may. But it might be a good idea to wait until the market becomes a bit more established instead of becoming a guinea pig in a relatively new experiment).

Businesses have had limited time to become acquainted with AlphaBay 2.0 as of yet (DeSnake says it is the same market, not “2.0”). There were no sales made by the suppliers indicated or any other sources that we were aware of. There looks to have been a significant amount of time and work put into the new features, some of which are absolutely novel.

It may be preferable to wait until stores have generated some sales before joining the “revitalized” AlphaBay. Freebies, such as pharmaceuticals for pennies, are already being offered by vendors. But no one is taking advantage of them though. Even while this isn’t precisely a red flag, the market is attempting to resurrect a darknet brand name that has had a rocky start.

More information about the marketplace? Well try to look at our simplified version of FAQs on AlphaBay. Still need more? Now get it in the FAQ area at the bottom of each page on AlphaBay.

The new AlphaBay is still under management of AlphaBay foundation. Public figures of the current Administration include DeSnake, the original co-founder of AlphaBay and security administrator in the period 2014-2017.

Yes, DeSnake signed a PGP message before the market’s return confirming his identification. Infact, almost everything is the same as the 2014-2017; AlphaBay.

Why did AlphaBay return?

DeSnake says, according to part of the PGP message he signed, that the reason for returning is not only the poor state of the DNM scene. But other reasons include  the lack of quality and professional marketplaces. He says that his main aim is leaving a legacy behind which is worthy of the ‘AlphaBay’ name and one which alpha02 would be proud of.
Another reason of vital importance of why AlphaBay is returning is how everything ended with alpha02. Arrests, indictments, and prison. He further argues that the authorities allegedly killed his partner without trial but staged it as suicide.

How has AlphaBay improved since 2017?

The AlphaBay market has seen a number of changes since 2017. From its administration to staff to Scam watch, the market has improved on a number of aspects. AlphaBay for example, now has their very own Automatic Dispute Resolver (ADR) system. The market also accepts only Monero as a mode of payment. Still, it heavily focuses on I2P rather than Tor Network basically for security purposes.

DeSnake z from the PGP signed message said: AlphaBay boasts unparalleled safety, ease of use and arguably the best staff team to facilitate all your deals.

This system ensures that even if the authorities seize all the servers, the customers would still be able to withdraw their funds. The system, which has been in development for nearly two years, has had a standalone testing period of over a year and so far, so good.

What is the AlphaBay Forum?

Most dark web marketplaces also operate alternative forums. AlphaBay forum is a place where the community; administrators, buyers and vendors come together to talk, share and discuss.

Why does AlphaBay recommend using I2P?

The new management believes in the future and encourages everybody to use I2P. Furthermore, Tor has of late been neglecting some essential upgrades. But, this puts users at risk. So looking at a clear alternative to Tor, I2P is undisputed.

How does Escrow work on AlphaBay?

This information is available on the site. There’s a section which explains every step. Auto-finalize, FE, what to do if you believe a vendor scammed you etc.

How do I become a vendor on AlphaBay?

That’s very cheap. You register an account just like any other user, but you specify that it’s a vendor account. Then you need to visit the vendor settings and follow the instructions given. Also, a vendor bond is needed, unless you’re a verified vendor with lots of feedbacks, then you can get a waiver.

Where do I find more answers to personal questions?

Carefully read the FAQs on their site? If you’re still not sorted, go to the forum and ask your questions. Finally, you can go to the support centre and book a ticket. A friendly staff member often comes in time and answers your questions.